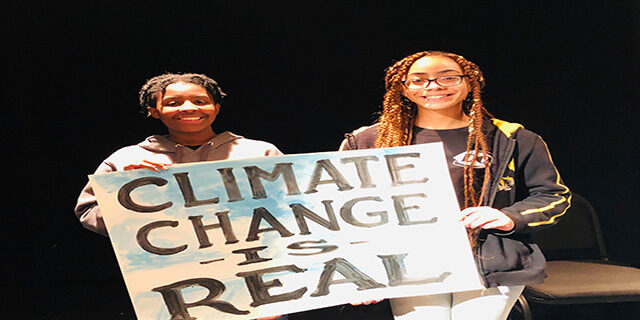 On Saturday Oct 16 from 1-4 p.m. in St Louis’ historic Central West End, Climate Change Theatre Action St Louis 2021 will be part of an international ecology movement representing over 250 events and 30 countries using the arts to call attention to the most pressing issue of our time.

Reflecting an age span of performers of over 50 years, the event will include performers from the Central Visual and Performing Arts High School in “How Dare You?”, an adaptation of teenage activist Greta Thunberg’s address to the UN, theatre students from the Webster University Conservatory, well known local theatre artists and performances by two dance companies, Ashleyliane Dance Company and Karlovsky and Company Dance.

The galleries include Duane Reed, Houska, Philip Slein, and projects+gallery, all located on McPherson Avenue in the historic CWE district between Euclid and Walton.

“Climate change is no longer a burning specter on the distant horizon. It is here now, wreaking havoc in our communities, in our neighborhoods, and it is currently and directly threatening our children’s very future. We must as a world work relentlessly, using science and the arts as our best weapons to fight this murderous man-made menace,” says project collaborator Philip Slein, owner of the Philip Slein Gallery.

Viewers will be able to see a short play or two of under ten minutes in a gallery before proceeding to the next gallery to see others. The event will feature approximately 8-10 short pieces that were commissioned internationally and have been published. Most performances will be repeated 4-5 times, in rotation, or approximately every twenty minutes, starting at 1 p.m. Some work may also be performed outside. Indoor performances will be limited to ten audience members at a time and masking will be required.

Produced by Joan Lipkin and Pamela Reckamp, the St Louis event is part of a worldwide series of readings and performances of short plays about the climate crisis and environmental justice. CCTA 2021 will take place from September 19 to December 18 to coincide with the United Nations Climate Change Conference (COP 26).